We All Have a Processing Problem

You may have heard recently that many of Intel’s Central Processing Units (CPUs) have a design flaw that could allow malicious attackers to steal private information.  Passwords, emails, etc. could be stolen because of “kernel memory areas” in the CPUs.

However, even though the focus is on Intel’s screw-up, it’s believed that CPUs sold by other vendors may have the same problems. Intel is just taking the heat because they’re the biggest and most reputable name.

What is a CPU? 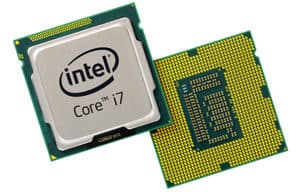 If you’ve ever seen a CPU (above) – also casually known as a processor – you would know it’s probably the strangest-looking part of a computer.  It’s relatively inconspicuous, but it is regarded as the “brain” of the computer, because pretty much everything needs to run through the CPU.  That’s why keeping the CPU at a low temp takes a lot of work, but is very important (if your computer is overheating it will probably shut down to protect the CPU).

What are the security flaws?

The two main “vulnerabilities” have cool names: Spectre and Meltdown.  They both can be exploited by malicious programs on your computer to get secret information from your currently running programs (password managers, emails).  The nitty-gritty details of it are complicated but the gist of it is pretty simple.

Your processor wants to act quickly and it makes information readily available, in an attempt to give you a faster and more fluid user experience so you don’t need to wait for the information.  These flaws take advantage of that optimization and the software patches to fix it might affect that.

The initial reports from PC Mag were saying that the software fix would be a big problem, and that it could potentially slow down your computer up to 30%.  Intel has pushed back at that statement saying “any performance impacts are workload-dependent, and, for the average computer user, should not be significant”.

So, if you’re a really intensive computer user you might notice your machine slowing down every now and then, but hopefully you won’t.

The Moral: Nobody is Perfect

Unfortunately, this is just the age we live in right now. We can just stick with our personal best practices. Use a virus removal you trust, keep an eye out for phishing attempts, and update your software frequently.