Be Wary of Fake iPhones

Nowadays, it’s easier than ever to buy a used phone off of somebody. It’s really simple for someone to have a phone for a year or two, decide to get an upgrade or switch carriers and get a good deal on a new phone, but their old phone is still worth a few hundred bucks. What do they do? Hop on Craigslist or Facebook Marketplace and sell their phone for a decent deal!

The buyer is getting a decent phone for a cheaper price than Amazon or Verizon would offer, and the seller is making some extra money – it’s a win-win!

What do you mean by fake iPhones?

The exterior appearance of the phone will look just like an iPhone, but as soon as we open it up it looks different. It basically means that someone put an Android motherboard into an iPhone case, and uploaded software onto the motherboard to imitate an iPhone’s interface. 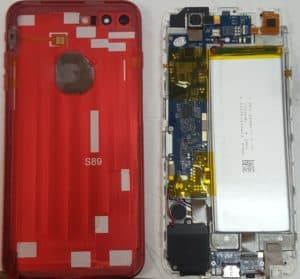 As you can see, the phone’s home screen looks just like an iPhone’s – and the best part is that it’s actually functional! However, you can’t update the software. This phone said that it was running iOS 10.6 and that it was “up-to-date”, which is incorrect considering iOS 11.3 just released.

When the customer brought it to their service carrier (presumably to import their information and SIM card) they were unable to. That’s why the top left corner of the “iPhone’s” display says no SIM card. It’s a good enough copy to convince someone that it’s a real iPhone that works and whatnot, but later on you’ll realize you got duped, and since it’s a stranger who scammed you, there’s nobody to really hold responsible.

How do I avoid being ripped off like this?

Well the obvious answer is to buy from legitimate storefronts, but that’s probably not the answer you were looking for. You should ask to see the phone before you buy it and go to the software settings on it to verify the current software version is up to date – or if it’s not, that you can see the newest version and install it.

To do that you go to Settings > General > Software Update. You’ll be served a screen that looks like this: 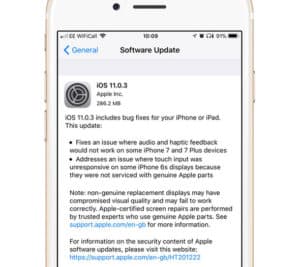 Granted, it won’t look exactly like that, but that’s the layout of an update that should be pending. You should verify that the software it wants to update you to, is the current iOS version out there.

If it says you’re all up to date but it’s using an out-of-date iOS, you should probably pass on it.