Apple announces a $1000 iPhone tomorrow – but will it sell?

As with any new iPhone launch, there’s a lot of speculation and intrigue building up to the product announcement. In the past, Apple has done a very good job at keeping details about the new iPhone under wraps and has been able to avoid leaks about details or design changes.

This time however, there has been a massive amount of data available about the expected updates to Apple’s iPhone product line. Keep in mind, people were expecting the iPhone 7s and 7s Plus, and iPhone 8.  Instead we got the iPhone 8 and iPhone 8s (which are essentially just mildly upgraded versions of the iPhone 7), in addition to the iPhone X (some new & improved features) – which is priced at $1000.

The real question is – with so many smartphones flooding the market, will people pay $1000 for a phone?

Apple’s customer base is massive and can’t be denied, but how much can Apple charge for a phone before customers start closing their wallets? Well, we decided to find out.

As you may know, iPhone repair is one of our most popular services. So we decided to spend a few days polling our customers and get some direct feedback from real iPhone users on whether or not they’d by the new phone. Please pardon the graphic because this was all made with the assumption that the newest iPhone would be called 8, not X.  Here’s what we found: 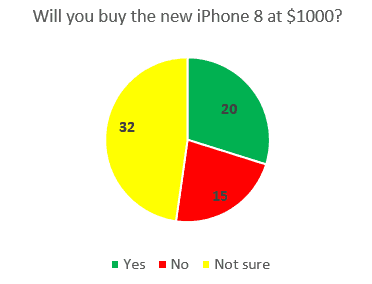 The “no’s” were a mix between people who thought $1000 was overpriced for a phone, and people who had a newer model already (no interest in upgrading) or were repairing their iPhone because they wanted it to last a few more years. Not a bad idea – but we’re a bit biased :)

The “not-sure” audience was the largest – which makes sense. We heard a lot of people in this audience say something like “it depends on the new features”. In fact, we summarized a lot of the common responses we heard from customers below (and tried to quantify about how many fit into each category).

We didn’t get responses from everyone, but categorized the ones that stood out.

A few other things to note. Our audience comprised only of existing iPhone users that came in for a repair. This means 100% of the people we surveyed owned and iPhone and just spent money to fix it.

We also have a fairly young customer base, and about 65% of the people we surveyed were 18-35yrs. (These are rough guesstimates, we didn’t ask for people’s ages). 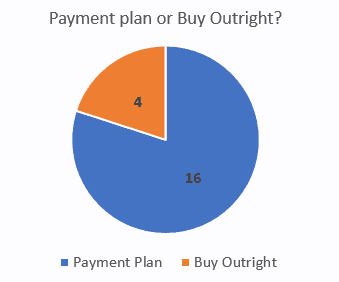 No surprise here, most people would opt for the payment plan. $1000 is a hefty price tag, but if it’s spread out across 2 years and 24 payments it becomes a lot more fathomable.