We’re obviously a big proponent of NOT getting the latest gadgets, and instead upgrading your old ones.  However, some things can’t really get upgraded (for phones we can fix it, but we can’t make it BETTER than it was new) or sometimes it’s just not worth it.  Also, given the nature of our work, we’re all pretty geeky and like the latest and greatest in tech – this is where we get to share that. In order to help you keep up with some of the newer trends in technology, we have put together a list of the top new gadgets that have debuted in 2017.

Where else would we start besides the brand new mobile phone?  The next iPhone isn’t out yet, and the Samsung Galaxy S8 is the latest Android model to be released. While its predecessor, the Samsung Galaxy Note 7, was disappointing to most people, the S8 is an improvement in many ways. With a larger, sleeker screen, the S8 has created an immersive platform for those who enjoy using phones for videos and gaming. It also has an improved camera, which has become one of the most important features of a smartphone. The improved pixel quality of the S8 makes for sharper, more realistic photos.While it still has its flaws, such as the occasional slow processing, many agree that the display and visuals are some of the best to ever come from a smartphone.

A terrific complementary piece to a brand new smartphone is a set of ear buds that match in quality. The latest gadget that guarantees to “drown out the noise”, is the set of Here One earbuds from Dop 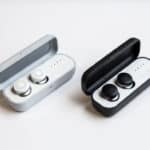 pler Labs. These wireless earbuds allow the user to manipulate the sound around them using built in microphones and sound processors; the goal being to be able to eliminate specific sounds around you. While Doppler Labs has not necessarily perfected this, it is still a far step in being able to completely manipulate the sound with your own earbuds. Occasionally the battery can be insufficient, but the pros outweigh the cons when it comes to the Here One earbuds.

For the past few years, Microsoft has been presenting consumers with a tablet that can do basically everything a regular laptop can. The Microsoft Surface Pro has been marketed as a 2 in 1 device, giving people all the advantages of a tablet and a laptop. Well, now they have finally come out with just a regular laptop. The Microsoft Surface Laptop is a more efficient, standard-type laptop that appeals to those who do not need the tools that come with a tablet.

The sleek design is reminiscent of the Macbook Pro, except it has fabric all around the keyboard (for those of you who value fabric with your computers). The Surface Laptop allows the user to run only Windows programs, but this prevents the system from slowing down or running into malware from other programs. Overall, the Microsoft Surface Laptop is a successful addition to the market of traditional laptop computers.

However, a negative that we know since we are a repair shop: you better not hurt it.  If something goes wrong with your computer, or you spill water in it, etc. it is near impossible to open up, so it’s not ideal

For televisions consumers are always searching for the perfect balance between the quality of the picture resolution and the overall size and sleekness of the television. LG has presented consumers with a new television that contains Organic LED technology that provides for more picture depth and contrast. However, it gets its “wallpaper” name from the fact that it is only .15 inches thick and weighs just 16 pounds. This helps the television to blend seamlessly into the wall, and with a screen size of 65 inches, it does not sacrifice any picture size for the smaller size of the entire device. 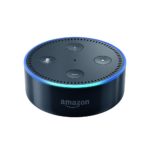 Voice-command devices are gadgets that are becoming increasingly popular. The Amazon Echo is one of the more popular voice-command devices, but Amazon has released a smaller, cheaper version for those who only require the more basic needs provided by the Echo. The Amazon Echo Dot, is a smaller, sleeker version that does not have the high-quality sound system of the regular Echo, but it provides many of the same services. The Dot is recommended for those who don’t require a top-notch sounds system from their device. However, if you are not satisfied with the basic sound system it provides, the Echo Dot is able to connect to another sound system nearby. The Echo Dot is recommended for those looking for a smart assistant device, but aren’t necessarily sure about making the full investment.

These are just a few of the new gadgets that are sweeping the technology market so far in 2017, and while more will come out in the coming months, the ones listed above are recommended for anyone looking to improve their current devices.